Do LED Lights Interfere with a Garage Door Performance?

Do LED Lights Interfere with a Garage Door Performance?

We have seen the popularity of LED lights skyrocket in the past five years. One reason for this being that they produce more light at a higher efficiency as compared to yesteryear’s incandescent bulbs. Another reason for their immense popularity is that they last way longer than any other lighting technology at the moment and so they don’t require replacing so often. However, some people have reported that their garage doors have started to open and close on their own, and that’s attributed to the use of LED lights.  You might be tempted to call a garage door repair company, which will save you time but you can also try fixing the problem yourself.

So, the question is, do LED lights interfere with the garage door performance, and can it be fixed?

How do LED Lights work?

To understand what can be causing the problem, it is important to take a look at how an LED lightbulb works. It works by emitting a constant stream of light but in reality, it flashes around 15 times a second. The process is known as pulsing modulation which isn’t detected by the naked eye.

Even though the naked human eye can’t detect the pulsing of these LED lights, their frequency falls between 30 to 300 Mhz. Interestingly most garage door openers operate at a frequency of between 288 and 360 MHz so that the digital signals could be crossing path and that is what is affecting the garage door’s performance. 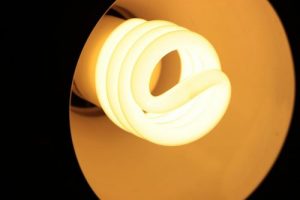 If you have checked out the garage door opener’s frequency and have determined that the LED lights aren’t to blame, then you have to check nearby CFLs or fluorescent lights. The use of older model bulbs can, at times, reduce the operating range of a garage door’s transmitter, which can interfere with the performance of the garage door. So, the best way to fix this issue is to perhaps swap out the CFLs in the vicinity of the garage door and see if that remedies the problem.

Identifying the Source of the Problem

The very first step to fixing the problem is to identify the source of interference. It could be a recently installed large Christmas light, or a new LED light you installed to keep rodents out. However, other stuff like WiFi routers and your car’s remote could also be blamed for the issue.

If you are unable to find the source of the problem, then hire a team of professionals. Professional garage door repair people have years of experience troubleshooting similar issues and should be able to find what is causing the problem. It could, at the end of the day even be the garage door itself.

As you can see, several things could be interfering with your garage door performance. However, with a structured approach and knowledge of lighting systems, it is easy to find and fix the problem.

About the Author: David C